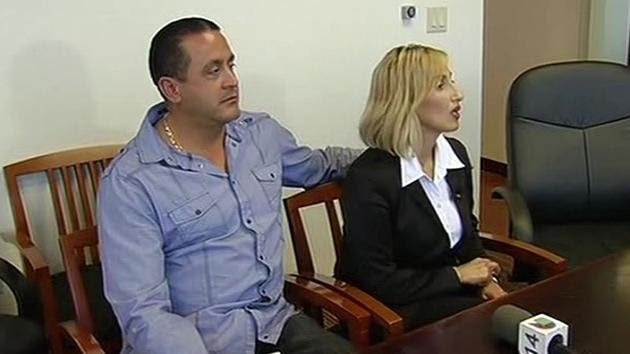 Oakland resident Olga Cortez and her husband say Officer Cullen Faeth terrorized them at their home while he was off duty and appeared drunk.

An Oakland police officer is waiting to find out if he will be charged with trying to force his way into a family’s home on what appears to have been a night of drunken mistaken identity. It happened in December, but the public is only hearing about it now.

Officer Cullen Faeth was arrested Dec. 7 after Internal Affairs launched their investigation. The case has been turned over to the district attorney’s office to see if they will file charges.

Meantime, we spoke with the lady who says they were terrorized. Oakland resident Olga Cortez and her husband appeared at a news conference with attorney John Burris who filed a claim with the police department after the incident.

She says on the night of Dec. 7 someone was banging on her door and yelling obscenities, demanding to be let in. She said it was Officer Faeth and he appeared drunk.

When she and her husband went outside to confront him, she says Faeth grabbed her in a big bear hug, “and out of nowhere he kind of faced my direction and then just walked towards me and jumped on me, and grabbed me really, really tight and we fell to the ground.”

Burris said, “The story here, from my point of view, is not only the distressing aspect of what happened, but was the fact that they were being treated like they themselves had done something wrong.”

The Cortez Family claims they saw a second officer out of their backyard. He appeared to have a gun and made a threatening gesture with it. Law enforcement sources say the men were at a party at a different home, went outside and must have mistaken the Cortez house for the house they were just at.

The Oakland Police Department would only say the investigation is continuing and Internal Affairs is in charge of that investigation.

Calls to several city council members and Mayor Libby Schaaf to comment on this incident have not been returned.

STAY CONNECTED WITH US:  